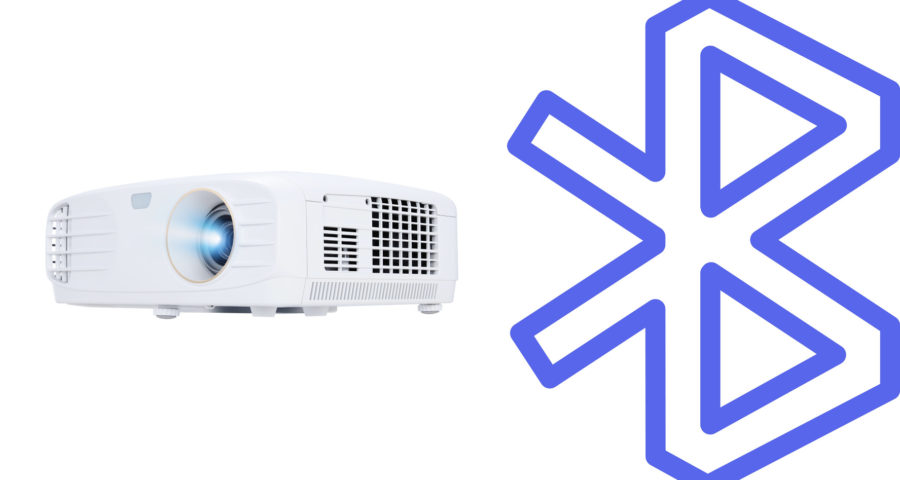 In today’s tech world, especially for entertainment, the popularity, convenience and usefulness of Bluetooth technology has greatly improved our lives.

The Bluetooth and other similar technology is here to stay.

In terms of convenience, Bluetooth technology gives us the convenience to be able to do away with wires and be wireless.

So in this article, we will find out, how we can make a non-Bluetooth projector to be Bluetooth capable using a few devices which are easily available for us to purchase.

So to quickly and shortly answer your question, yes! You could make your projector a Bluetooth projector using a Bluetooth transmitter, read below to find out how.

Why would you want to make your projector Bluetooth?

Firstly, projectors can have both video and audio be sent over Bluetooth.

But since the complexity of converting video to radio signals and converting them back and since they are “heavy” data wise, it is not a good idea to be doing so, as the latency transmission of video would be significantly high.

Now, high video latency or lag is something that would totally irritate a gamer and presenter likewise but having a projector transmit audio over Bluetooth to a sound-bar, speaker or earpiece is not a bad idea at all.

For convenience sake, you could have a projector pipe audio into another speaker via Bluetooth and the speaker could be at a distance from the projector.

Scenarios such as the above, makes Bluetooth a lifesaver.

There are many more instances why you would need Bluetooth, but because most speakers nowadays have Bluetooth and lack aux input, this is where a mismatch comes in, you could be using older models of projectors that does not come with this capability.

Or maybe your projector really doesn’t come with it.

So with that said….

Here’s how you could make your projector Bluetooth capable

If you haven’t heard of it, it’s called a Bluetooth transmitter and receiver, these devices outputs 5 watts, are low fidelity and streams high quality audio.

These devices, can be paired with phones and computers so that they can receive and send data on the 2.45Ghz range and audio that is received, is sent out onto a 3.5mm audio jack which then inputs audio into a speaker.

Its battery lasts up-to 10 hours per charge and can be paired with anything that is Bluetooth.

Range wise, it can do up to 10 meters, which means, your projector can be located in the living room while the speakers are in the bedroom.

They are really affordable and can be bought cheaply off of Amazon.

So this right here is the solution here, a Bluetooth receiver and transmitter what is used to make your projector Bluetooth capable.

Setting up your projector for Bluetooth

There are two possible scenarios we have here, depending on the type of projector and the connection that it has, but basically it comes down to piping your audio into the transmitter and pairing the device with a set of speakers.

Here’s how it will work with different types of connections

If the projector has stereo analog audio out, then you would need an RCA cable to bring your audio into the transmitter device.

RCA output is the output that is on every DVD players and that we are all familiar with, the red, white and black port/output.

With these kinds of projectors, connections are pretty straight forward although, you may need additional connectors, a pin that connects RCA cable to the Bluetooth receiver/transmitter would also be needed.

Some if not most modern projectors have HDMI as an output, with HDMI, it has both video and audio as digital data.

A HDMI audio extractor is needed to extract the audio part from the video and audio transmission on the cable, it separates the audio from the audio and video digital transmission of the HDMI cable and outputs it to a 2 channel analog source.

The analog audio can then be thrown into a Bluetooth transmitter using an RCA cable, with an additional connector that will allow it to be plugged into the transmitter through a 3.5mm connector.

Although most audio extractors can output analog sounds to RCA output, some HDMI audio extractor can bring out 7.1 surround sound through a coaxial cable which can go straight into a subwoofer system.

Sounds complex for some, but it actually is really simple

How to use a Bluetooth transmitter with a projector?

The Bluetooth transmitter has an RX and TX mode, meaning a transmit and receive mode, with this modes, it can make your projector a receiver and sender of data (by sending and receiving audio data from your projector, that is).

We are particularly interested in the TX or transmit mode, this allows your projector to input audio into a wireless earpiece, Bluetooth speaker or other device.

So basically, this mode, makes your projector Bluetooth capable.

With just those simple steps, your projector is Bluetooth capable and allows you to watch movies on a projector while wirelessly connecting to an audio device.

This can be done with earpieces, speakers and any other Bluetooth devices.

Pros and cons of BT transmitters

As per customer opinions, the BT transmitters work well for turning your normal projector into a Bluetooth one.

The hold charge and last long but may have range issues, they may need to be a few feet away from each other and may take some effort to pair them.

But when paired, they work really good.

It takes audio from devices such as a projector and sends it via Bluetooth to a paired device.

Now, as said above, extra devices and connectors may be needed in between the projector and the transmitter, such as a connector pin for rca to aux and an audio extractor for separating video from audio on a cable.