In this article, we will be reviewing the Benq tk800 vs Optoma uhd60 projectors,we will try to compare the important specs only in-order to avoid further confusion and leave more doubt in buyers than actually make up their minds.

A similiar comparison was done, UHD50 vs UHD60, do check it out!

If you are thinking of buying either of the projectors, Benq tk800 or the UHD60 projector, do read our reviews thoroughly in-order to have an idea on how these projectors perform.

At the end of this article is my personal opinion of both of these projectors, if you are not a fan of long chunks of texts, then scroll right down to read a summary of this BenQ tk800 vs Optoma UHD60 comparison. 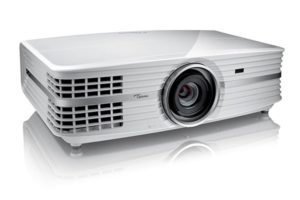 Projector brightness, which is measured in lumens, as both these projectors have the same capability of brightness of 3000 lumens, they both win.

Since they have same amount of brightness, we will be looking at other aspects or features that should set them apart.

So if you are looking for a bright projector, then either the Optoma uhd60 or the BenQ tk800 both has 3000 lumens.

With that brightness of a projector you can use both these projector outdoors for outdoor movies, presentations, wedding photos etc.

Yes, 3000 lumens is good enough for outdoor use.

Furthermore, more brightness means, darker pictures even when it is really large.

When it comes to the looks of this projector, the BenQ tk800 wins hands down, it is more modern looking and handsome.

A similar comparison was done namely, Epson 4010 vs Optoma uhd60 do check it out.

They both give out excellent picture quality at  3840 x 2160 pixels. This resolution is Ultra High Definition and they both give quality images even at when the image is as large as 300 inches.

Which makes both of these projectors, good projectors for home theaters.

Contrast ratio is something that’s often neglected when consumers buy a television or a projector. The quality of images of a projector is often determined by the this ratio, the contrast ratio. Let’s find out why.

A bright white and a really dark black is a result of high contrast, that is also what makes a projector image look good, when the dark shades are the darkest and the whites are the brightest.

So for a dark black crispy picture, the Optoma uhd60 is your choice. 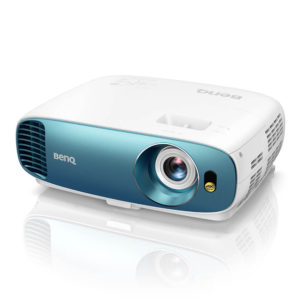 These are the commonly used screen orientation (if that word can be used), 16:9 and 4:3, 16:9 which is are mostly used by movies, are native to both of the projectors.

The BenQ tk800 and Optoma UHD60 has come to a tie at this leg of the comparison.

This has to be one of the most important factors that one must consider when buying projectors as this will be how media is fed into the projector.

The BenQ tk800 has only VGA and HDMI which is not the best in terms of flexibility.

The Benq tk800, gives you basic of connections, although not the most convenient, but sufficient enough for movies, presentations and gaming.

Optoma uhd60, wins this part of the comparison, having HDMI, USB and VGA, the uhd60 can read straight from a USB, while it’s competitor will need a laptop or tablet to feed it the files (movies, presentations) that it needs.

Consider screen size if you are to set up your projector for home theaters and gaming.

To be frank, i’d still consider them draw, because a few inches is not substantial enough when it comes to screen sizes.

So if you need a projector to carry around, the Benq tk800 is only 9.26 pounds whichs is 7 pounds lighter than it’s competitor.

Buy it on Amazon

Buy it on Amazon

Do check out my similar comparison EPSON 4010 VS OPTOMA UHD60.

My Opinion on Benq tk800 vs Optoma uhd60 (verdict)

So after doing a benq tk800 vs optoma uhd60 comparison, we can see that they both are the same in terms of brightness, resolution, aspect ratio but what sets the uhd60 projector from Optoma is that it’s contrast ratio is 1,000,000:1 which beats the 10,000:1 that the BenQ tk800, with that contrast, the UHD60 has darker black than the tk800 projector.

So if I was looking for a projector for my home cinema, I’d probably go with the uhd60 projector, but there’s one drawback to this projector when compared to it’s competitor is that it’s more heavier at 16lbs.

It makes sense for a projector with that much brightness and contrast ratio to be heavy, it’s jam packed with heavy components that enable it to deliver quality images.

If what you are after is a light projector for you to take around with you but still has good capability, brightness and what not, then the BenQ tk800 is for you.

With regards to pricing, their price difference is about $200 at the time of this writing (prices may change), with the BenQ projector being the cheaper one of them.

So, if I was on a budget, I would take home the BenQ tk800 projector, but it’s worth the wait to save up for the Optoma UDH60 because of it’s contrast ratio, it has a more dark, pleasing images that you may want for gaming or movies or presentation.

So as we wrap up this Benq tk800 vs Optoma uhd60, I can say that both are really good projector, but for the good contrast ratio that the UHD60 has, I’d pick this as our winner.

The BenQ tk800 is still is as good as the UHD60, it is more cheaper and has low fan noise, but for the contrast ratio that it’s competitor has the UHD60, Im taking this one home!

<<Click here to buy the Optoma UHD60 from Amazon>>

Previous post : Best cheap projector for daylight viewing – Buyers Guide
Next post : How do i know if i need a new printhead – Printer guide