In this article we will be comparing two projectors of different brands. This will be a Epson 4010 vs Optoma UHD60 comparison.

A similiar comparison was done, BenQ tk800 vs UHD60, do check it out!

If you are in a hurry, scroll down to the bottom of this page to read a summary of their comparison and also my opinion on which of these two, I’d pick.

Regardless of the use of projector that you are thinking of, whether it be for movies or gaming or even for PowerPoint presentation, we will be looking at which will be the best option between the two projectors.

We will be comparing specs and talking about how these specs differ from each other and also how  might fit you. Without further ado let’s get into it.

When these two projectors are side by side, the Epson 4010 is dimmer than the Optoma UHD50.

600 lumens difference between the two, with UHD60 having more lumen, meaning more brightness.

Even with 3840 x 2160 pictures are clear and also works well for text presentations.

Both projectors are good in terms of resolution, they will both give big clear pictures but, the Epson 4010 is even more superior with 4096 x 2160 pixels

Native resolutions is the base resolutions of both of these projectors, they can however push themselves with digital enhancement of the pictures which gives it more resolution than it can do.

The maximum possible resolutions of both of these projectors are 4096 x 2160 while the Optoma UHD60 can do it at 60 hertz,

That means that the Optoma projector can do 4096 x 2160 with smooth pictures, it is unclear, how many hertz the Epson 4010 can do.

In this part of the comparison, they both come to a draw as they nearly got all of what the other has, the UHD60 has an optional wireless feature while the Epson 4010 also has a built in USB drive that will take USB wifi adapters which makes the projector wireless.

If you are after a projector for your home theater which most people will be, then the projection size of your projector is something that you must consider or take into account.

Not much difference between the two in this aspect.

The UHD can do 4.2’ to 30.5’ (feet) when projecting, most people prefer projectors a projector that can project as close as possible to the wall, well for that Optoma UHD50 it will do from 4.2 feet up-to 30.5 away from the screen, the Epson 4010 on the other hand, will do upto 32 feet away from the screen and still have clear pictures.

Although the UHD has a contrast ratio that’s not native and is insanely high, it is however, the better between the two as images appear of well made (blacks are more blacker and the whites are more whiter) 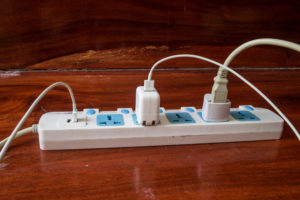 Epson 4010 vs optoma uhd60 on power consumption. As we all like to save money by saving electricity, here’s how much they consume during an hour of usage.

So the UHD60 is economical just by a few watts every hour, but they add up over time, but honestly speaking, you won’t feel much when the bills are out.

Throw ratio is what determines the size of the image relative to the distance to the projector screen.

This is also why the Epson 4010 is more short throw than the UHD60 projector.

The UHD60 is cheaper by about $600 dollars at the time of this writing and prices may fluctuate by a few dollars, so hands down this projector is a winner between the two. Not only does it have better features, but the Optoma UHD60 is also much cheaper.

So it’s time to make a final decision on which of the two projectors to buy, given that both of these projectors are both high end 4K projectors with good enough brightness and resolution for gaming, home theater, projection mapping and school presentation, I ‘d be picking the more cheaper and better performing one.

The UHD60 is best for budget minded people as it is more cheaper, however the Epson 4010, has more apect ratios and is more short throw between the two.

The Optoma UHD60 is brighter, it is bright enough for use at daytime use.

I’d be picking the UHD60 over the Epson 4010 because it is cheaper by a few hundred dollars and also has a little more better features than the 4010 projector.

While still on home cinemas, since the you’d want large images over a short distance, the Epson 4010 is your choice since it has a better throw ratio.

On the world’s biggest online shopping website Amazon, it has received overwhelming amount of reviews (Optoma UHD60) which simply means that people are buying more of this projector over the 4010 projector which is made by Epson.

The Epson 4010 was also released later than the UHD60 projector which is a good thing.

In terms of power consumption, the UHD60 , consumes lesser power by a few watts on every hour that it runs, it adds up over time.

Check out the Optoma UHD60 on Amazon.