What is keystone correction

Keystone correction: what is it?

If you have read or heard about keystone corrections, then you will know that it is associated with projectors, this is a term that is often used on projectors.

It in fact is a feature of projectors.

I have decided to write about this article after I have seen some posts on forums with “I can’t get a perfect rectangle from my projector” or “how to straighten projector image”.

What does it mean?

Keystone correction is simply the correction of a distorted image that has been projected to an angular screen making it uneven.

What happens when you project something onto a screen that does not directly face you or is at an angle, you get uneven projection, a normal projection is supposed to be square, but a projection from an angle forms a trapezoid shape which is not pleasant to look at.

The process of correcting this anomaly, is called keystone correction.

Keystoning happens when the projector is not lined up perpendicularly on to the projection thus resulting in a mis aligned or skewed image.

In other words, mounting the projector at an angle, causes keystoning as the best angle to project is parallel, the projection must be parallel to the projection screen for the best viewing experience.

And if you are doing a presentation, having a keystoned projection will make you lose your audience and defeat the purpose of projectors in the first place.

And also, if you are watching a movie, it will not be enjoyable because of the skewedness of the images, hence the feature that projector makers came up to combat the issue.

You can fix keystoned projection, simply aligning the projector to match the screen angle , this is often the best way to fix keystone.

Another way to fix keystoned image is to simply tilt the image screen so that it rights itself onto the screen.

How to keystone on a projector.

Now that we have covered manual keystoning to correct the non-perpendicular image on the projector screen, we will now cover how to use the keystone correction feature which comes with most projectors.

The keystone feature on a projector is useful when users cannot move the projector around.

There are many ways to correct keystoned images on various projectors.

Some projectors have the arrow icon button on the top of the projector, you can just press it according to how you want the keystone correction to be done.

Press the up arrow or down arrow to move up and down. 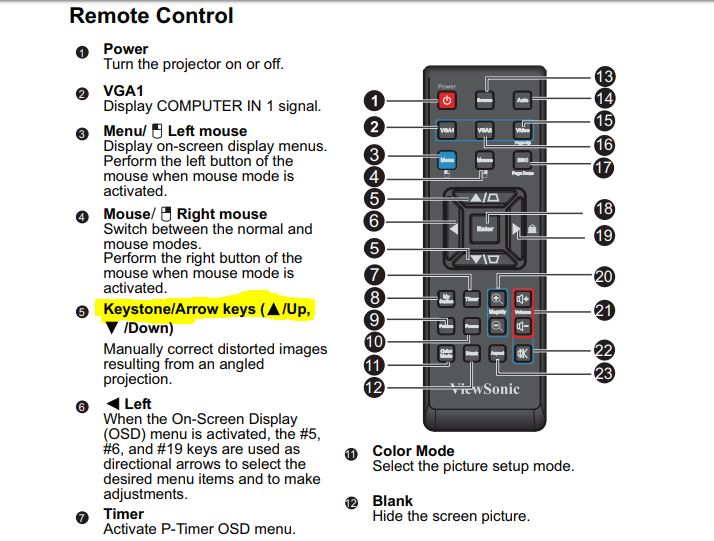 Yes, there will be a slight loss of resolutions from keystone correction this is because, keystoning involves shrinking the number of pixels digitally.

Image resolutions is usually lost in this proccess.

Previous post : Why using a projector is better than a TV screen
Next post : How do wireless projectors work